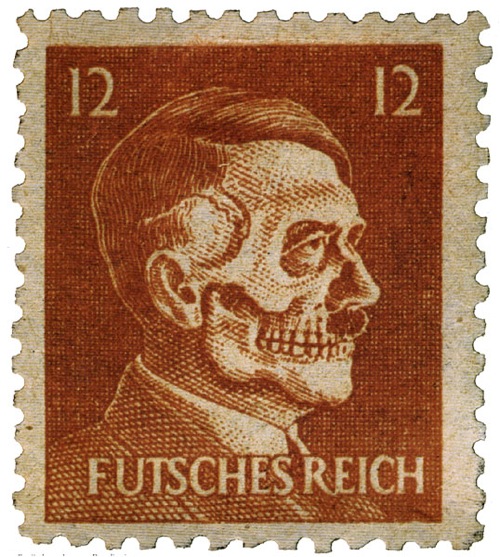 While the concept of war may conjure images of armed men, espionage and heavy weaponry, psychological warfare has also played a crucial part in the conflict between nations. Being able to sow dissent and discontent among both the opposing forces and civilians can have a powerful effect. The messages spread can cover a wide range of objectives, from pointing out the perceived evil of the enemy, to positive representation of one’s own faction or mockery of a foe. In World War Two, this led to the practice, employed by both the Axis and the Allies, of forging postage stamps – something everyday yet significant, aimed at ultimately undermining the enemy. 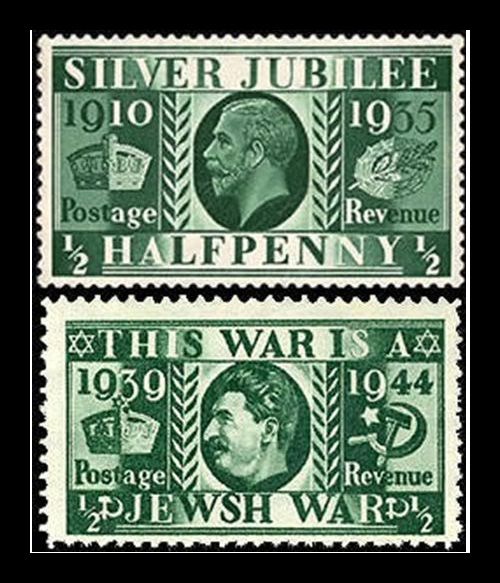 This propaganda stamp (bottom), produced by the Nazis in Sachsenhausen concentration camp, was a forgery of the 1935 halfpenny stamp that was issued to commemorate the Silver Jubilee (25th year) of the reign of the United Kingdom’s King George V. The official stamp depicts a portrait of the King, but the Nazis replaced this with a portrait of Joseph Stalin flanked by Stars of David and Soviet hammer and sickles. The dates were adjusted and framed by the legend, “This war is a Jewsh war” (sic). The forgery shifts the blame of the war squarely onto the shoulders of the Jewish people, linking Stalin with the enemies of Nazism, while supplanting the British figurehead with that of the Soviet leader. 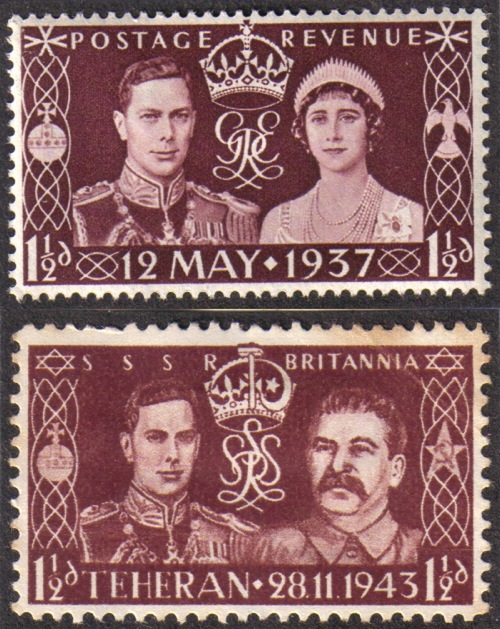 Similar to the Silver Jubilee stamp just seen, this original (top) was issued in 1937 to commemorate the coronation of George VI and depicts him and his wife Queen Elizabeth. In the falsified stamp (bottom), Stalin once more appeared, this time in the place of the Queen, and again the hammer and sickle and Star of David symbols were introduced. The image of the new king being in partnership with Stalin is rather blunt, and even to the modern eye it immediately suggests that the British nation is being sold out to the Soviet Empire. At the top, the stamp bears the legend, “SSSR Britannia,” perhaps inviting a mistrust of then allies among the people of Britain. Divide and rule seems to be the overriding intention.

Forged stamps depicting Heinrich Himmler (center and right) were issued by the British Special Operations Executive (SOE). They were designed to emulate German stamps portraying Hitler (left). The premise was that Hitler would become paranoid that Himmler was planning to become the Führer, with his own image placed on postage stamps in preparation. Focusing on insecurities was a key tactic in psychological warfare during WWII, and this stamp intended to prey upon any anxieties Hitler may have had about Himmler’s ambitions. 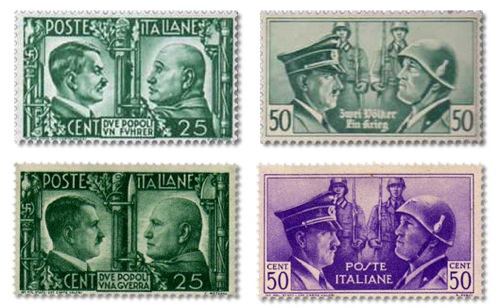 There were two forged stamps focusing on the relationship between Berlin and Rome. The original stamps depicted a scene with Hitler and Mussolini facing each other in a formal manner. The British redesigned one of these (bottom left) in a most noticeable way (top left), replacing the Italian text of “Two peoples, one war” with the German phrase, “Two peoples, one leader.” The portrait of Hitler was altered to show him snarling at Mussolini, who appears taken aback – so all in all, quite different from the official version. The other stamp was more subtly amended, so that at first glance it might appear to be the original (bottom right), albeit in a different color. Here, the British only changed the Italian post office logo to “Two peoples, one war,” written in German (top right).

6. All for Norway, or all for Germany? 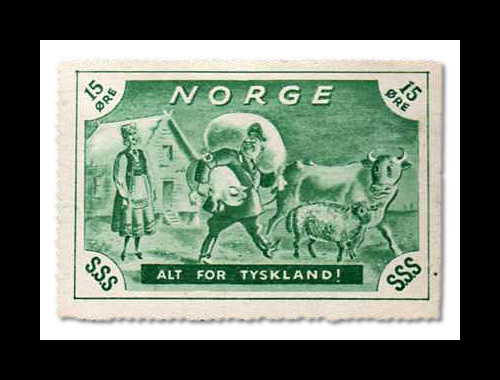 Again prepared by the SOE in Britain, this stamp is quite blatant in its message. It depicts a rotund Nazi with a pig under his arm, absconding with the livestock of a Norwegian villager. It carries the slogan, “All for Germany!” – a reference to the Norwegian King’s motto of “All for Norway.” This was airdropped into occupied Norway in an apparent attempt to promote resistance. Despite their informal nature, cartoons like this played a crucial role in propaganda during WWII, with even renowned children’s author Theodor Geisel (of Dr. Seuss fame) lending his efforts to the creation of images intended to support the war effort and influence the public. 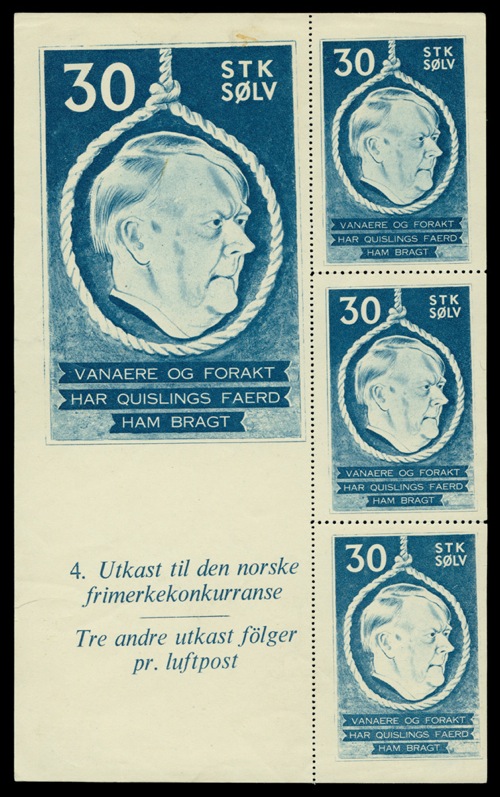 Vidkun Quisling is a name that has been immortalized in the Collins Thesaurus of the English Language as a synonym for a betrayer, collaborator and turncoat. After he sold out the Norwegians to the Nazis for personal gain, he was universally despised by his countrymen. The British SOE created a stamp that depicted Quisling in profile, with a noose framing the portrait and a legend reading, “Quisling’s conduct has brought him dishonor and contempt.” After the war, Quisling was tried and found guilty of high treason and other crimes. In 1945, he was executed – not, as in the stamp, by hanging but by firing squad.

This propaganda effort is interesting on many levels. Erwin von Witzleben was General Field Marshal in the German army. He was highly decorated and was seriously wounded during his time in service. Some sources say that he retired after criticizing the Nazis when their influence was growing. After attempting to assassinate Hitler on July 20, 1944, von Witzleben was cast out of the Wehrmacht so that he would not receive a court martial. In his August trial, he was humiliated, deprived of a belt so that he had to continually hold his outsized trousers up by hand. The British created a stamp that parodied a German issue, depicting a portrait of von Witzleben in place of the official storm trooper. The top part contained a sober, “Hanged on 8 Aug 1944.” 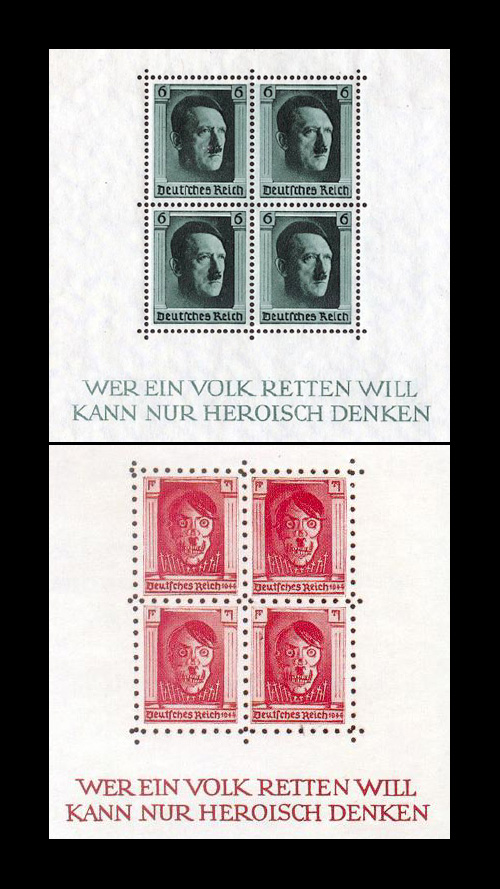 Portraying the enemy as death or the creator of death was a much-used Allied tactic. A famous example is the parody of the stamp set released in 1937 to mark Hitler’s 48th birthday. The original (top) is a normal portrait, bearing the motto, “He who wants to save his people must think heroically.” Yet the US Office of Strategic Services (OSS) turned Hitler’s portrait into a crude death’s head glowering over a row of 13 crosses. A banner underneath the image states, “German Empire 1944” – suggesting that the Führer and his Reich intended only to kill. 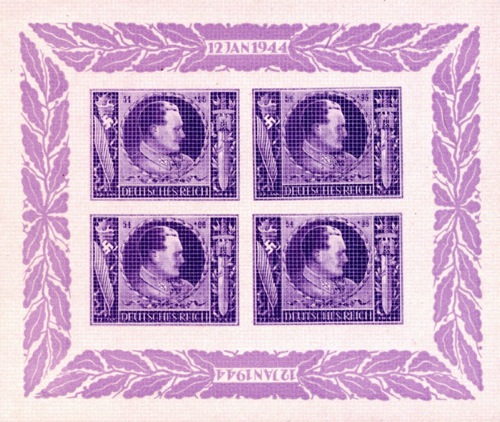 Hermann Goering, the commander-in-chief of the Luftwaffe, was also featured in a falsified stamp, which depicted him imprisoned behind a wire fence under the date of his 51st birthday. It parodies a 1943 stamp that commemorated Hitler’s 54th birthday. The difference with the Goering image is that it is not an officially produced work by the US or Britain. While some put it down as a British forgery, other stamp experts believe it was privately produced by someone keen to make a profit. Either way, replacing the intended subject of a stamp with another earns it a place on this list.

The OSS printed forged stamps on a large scale as part of Operation Cornflakes. The purpose was to undermine the enemy. They would affix the stamps to letters that were dropped near bombed mail trains, hoping that postal workers would then deliver the fake mail to its addressees. Many of the envelopes included anti-Nazi literature. While some of the letters had realistic forgeries affixed to them, others included a death’s head version. It wasn’t subtle: it depicted Hitler’s head as a skull, yet with his recognizable hair and mustache, again apparently trying to associate the Führer with death. While the positive propaganda surrounding Hitler focused on his image as the dedicated leader of a new, stronger Germany, this stamp paints a very different picture.

Kids With Mental Disorders: A Staggering 1 in 5 Annually